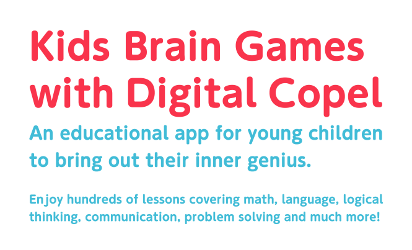 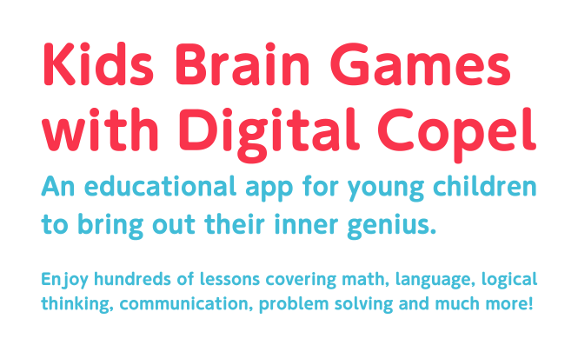 Targeted for 2 years and up 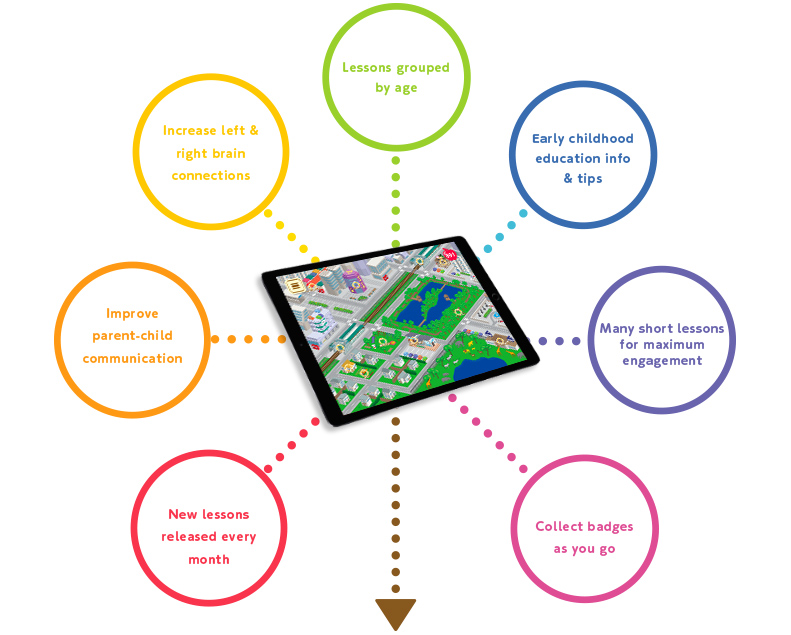 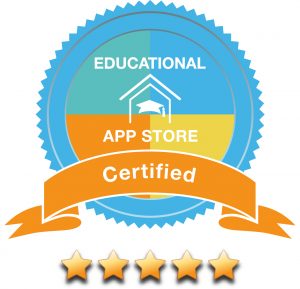 2021/03/31
Thank you all for your continued support and use of Digital Copel. After a long 8 years and due to difficulties in maintaining the service, it is with a heavy heart that we have to shut things down.

2017/10/13
We’re proud to announce the release of Digital Copel v2.2.1 which brings many new exciting updates.

Using AI, lessons tailored to maximize the educational benefit for your child will be sent to you regularly. Read more >

2017/4/14
We’re proud to announce the release of Digital Copel v2.1.0 with many fun new features and improvements including a statistics feature and song videos. Read more >

2017/1/12
In a collaboration effort with Takeo City Library in Saga Prefecture, we are pleased to announce we have begun offering a free rental service of tablets specifically loaded with Digital Copel. Library users may use the tablets for 30 minutes in the children’s reading area of the library. 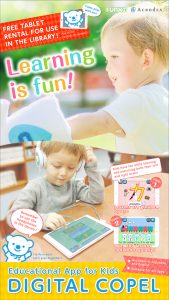 2016/12/09
We’re proud to announce the release of Digital Copel v2.0.2. This update includes many improvements on speed and stability and some new features including support for Apple Watch! more ＞

2016/11/02
We released Digital Copel TV for Apple TV. It contains a mixture of Japanese and English kids songs along with Hiragana and Katakana song lessons.

2016/10/23
We hosted a “Experience Digital Copel!” booth at the Kurashiga Smart 2016 event in the city of Kita-kyushu. Lots of children had fun trying out Digital Copel. 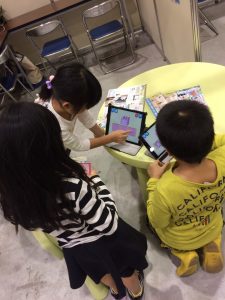 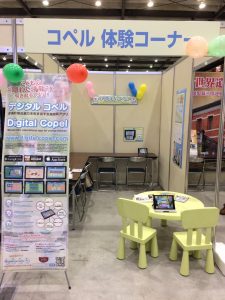 2016/06/28
We have released Digital Copel version 2, introducing a wide range of new features:
– Copel Canvas – get decorations from completing lessons and design your own Copel Canvas.
– Town maps! Lessons are now spread all over Copel Town. Explore the maps to find them all.
– Completely renewed menus and interfaces.
– Read the Copel manga talking about the benefits of Copel education.
– New lessons!
– Various performance improvements and bug fixes.

For over 30 years, the Japanese company Copel has been providing education for young children throughout Japan in their own special Copel Classrooms. There are 100+ throughout Japan.

One of the core concepts of the Copel teaching methodology is that children learn best when having fun. Each lesson that Copel provides is unique and originally developed by their team of education professionals. By strengthening the connection between the two hemispheres in the brain, a child’s untapped potential to become a genius can be brought forward, nurtured and encouraged.

After a conducting a survey with 600 students and their parents, 99% of them responded positively saying that they were highly satisfied with Copel and were seeing real results in their children. After taking an IQ test of students who had attended Copel’s classrooms for one year, their average IQ result was over 130 compared to the norm for their peers which is 100.